There are certain things that exist in this world that you may not really think about until something goes wrong. One of the largest overlooked items is most likely one’s sump pump. Many can probably relate to looking down into your home’s sump pump as a child wondering what it was and what it did. However, as some grow they may still wonder what a sump pump does and what it’s really there for. Some may not truly take the time to fully understand a sump pump and it’s processes until it is overflowing and he or she has a basement covered in water.

The Fundamentals of a Sump Pump

So…what is a sump pump? A sump pump is a siphon used to remove ground water from underneath your home. Why is that important? If it weren’t for your sump pump, water from the ground which accumulates after a large rain or when the snow melts would try (and most likely succeed) in finding another way into your home. So the sump pump allows water to slowly accrue in the sump basin or crock. The sump basin is the cylindrical hole in your basement which the pump sits in. Once the water in the crock rises to a particular level it switches on the pump which then drains the water out of the basin through a discharge pipe and back into your yard.

Not all sump pumps are the same; some run once a day while others run once a week – it doesn’t mean that one is better than the other. A sump pump may run differently for each home simply because each home is different. However, you will learn the rhythm of your own pump and know when it may not be performing correctly.

Sump pumps are most likely to become problematic when they are overwhelmed by the water they are taking in such as after a large rain. However, it is possible that your sump may have had a minor problem before, but it only became apparent once it was forced to deal with the large amount of water coming in. Typical problems with sump pumps which cause them to fail include the motor burning out, a switch may go bad, and/or the float may be jammed. In most occasions the entire sump pump does not need to be replaced, but only a certain part.

How to Help Prevent a Sump Pump Malfunction

While completely avoiding a sump pump malfunction may not be completely realistic; it is possible to take preventative measures and reduce the risk of having a water loss. First, stay attentive to what you sump pump sounds like and the schedule that it is running on. For example, if it most often runs once a day and then stops go down and take a look. Also, if you have children and/or pets be watchful that no outside debris such as toys or bones have been placed in the sump pump crock. Objects such as those listed above may cause blockages and back-ups resulting in your sump pump overflowing.

Secondly, take precautionary measures. There are a few different ways which one can be proactive to a sump pump overflowing. Examples include, battery back-up pumps for when the home loses power, a gravity flow pump which works off of the city’s water to propel itself to pump, as well as many technological devices which will alarm you when water is at a dangerous level within the crock (some will even send you a text message).

Lastly, if you have taken every precautionary measure, but still want to be more prepared for a water loss look into purchasing a back-up pump. A “trash pump” or removal back-up pump can come in handy if the water in the sump is rising too high and you need to quickly remove it.

When You Plan for the Best, But Get the Worst 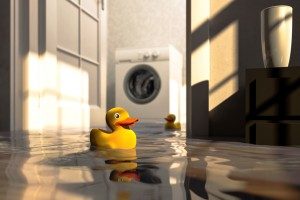 No matter what precautions you have in place be prepared for the worse. Not all insurance policies cover water losses due to a sump pump malfunction. Take a moment to call and check in with your insurance agent or carrier. Ask if you have coverage and if not what it would cost to add a sump pump rider to your policy. Then if a water loss does occur you will know and be confident in what your policy does and does not cover.

If a water loss should occur in your home remain calm and call Aladdin’s at 810-664-1705. We have certified technicians on call 24/7 to help you with whatever household emergency you may have.

Get In Touch With Us